Last year, when I returned from my roadtrip in Europe, I felt the deep desire to keep living in my camper for as long as it was possible. Even though I was in the Netherlands, which would mean that there where rainy and old winter months coming up. Just for the convenience, I didn’t take into account that the rooftopmy camper had been leaking for a while. When I was just living the camperlife on the coast of southern Europe, I didn’t mind that much about my leaking roof. And once I back in the Netherlands I just ignored that there was a problem with the camper. What you don’t see, doens’t excist. In September, when the first autumn showers poured over my camper and I had to put down trays to catch the dripping, I let the painful news get to me. I had to end the camper lifestyle, at least for the time being. On October the 13th in 2019 I drove my camper to the storage and a month later I was handed the key to my house in Groningen.

It felt like a forced divorce, one we both didn’t want. We had such a wonderful time together and I kept wishing to stay in that lovely energy of camper life. But, things are going the way they are, so I surrendered to living in a house. With the energy I had left, I rebuilded the house I bought. The first few months I lived on the concrete floor, without furniture, and as curtains I taped the windows with garbage bags. There was no kitchen in the house yet and so I cooked on a camping gas set. It was my kingdom! Running water, electricity while the sun wasn’t shining, a hot shower and a toilet that I didn’t have to empty myself…what a whealth!

Friends and family saw something else. “El, it’s like a drughole in here.” Hmm, maybe it is, right? Others were saddened by the sight of the mattress lying on the concrete floor. “I just think, if you live like this, you’re not doing fine.” Well, to be honest, I didn’t necessarily felt fine indeed. I was still in a lot of pain, eczema and my energy level was worryingly low. Though I felt I was on the right track. I just knew that when I started living in the camper on July the 1st in 2018, a seed was planted. A seed that I knew would grow into a lush tree.

Back in business with the camper life

As we speak, the roof of Weinsie is closed again, there is a kitchen and a floor in my house (there are even curtains and lamps!) and the camper and I are ready for some new adventures of the camper life. Last Tuesday we were reunited and have not been seperated ever since. Where just in love, I never want anyone else, and I don’t believe the camper would even want another owner either. How the new adventure will unfold, we have no idea yet. There is no plan, just the desire to be together.

What camperlife brings to my life

And it’s so beautiful what our time togheter brings into my life. I feel like writing and sharing again! I’ve only been on the road for a few days, but the adventures are unfolding every day. At the sneaky spots in nature near the water, where the camper and I hide, we are being recognized by people who have seen us before. And people like it! We talk about the roadtrip in Europe, the camper life, about how they live their lifes. I have a view on Polish fishermen, elderly on electric bikes, men of in their fourties with shaved legs who go supping and retired men who make a trip on an old-time moped. In the meantime, I’m in a canoe with my nephews and niece, my parents cycle by, I fill my water tank at a friends house and, despite my sore feet, I’m tempted by her boys to play football with them.

Everything has two sides

The other side of the coin is still there. The nap in the afternoon to be able to hang in there during the day, the inflammation in my foot that has kept me from walking pain-free for a year and a half, the inflammation in my knee that prevents me from cycling more than ten kilometres. Recovery takes time and goes with trial and error. Soon I will be sharing an essay here that I wrote about my process that I went through in this over the past few months. Writing that piece gave me the greatest gift I’ve received in the last few months: the acceptance of how I feel.

Don’t you want to miss a story in the upcoming time? Leave your email address! (Registered but not received a confirmation email? Check your junk mail). 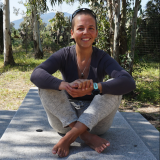